Here in Australia Samhain falls on May 1st, so our 'Hallows Eve' falls on April 30th.
We've previously celebrated Lammas, the first harvest, and Mabon, the second harvest.  Samhain, which means summers end, marks the third and final harvest.  Agriculturally, it was the time that farmers made the choice about which animals to keep for breeding in the spring, and which would be slaughtered for feed.  The last fruits and vegetables of the season were harvested and preserved for the coming winter when fresh foods were scarce.
Pomegranates are a powerful symbol at this time.  They represent the journey Persephone makes to the underworld, causing Demeter to go into mourning and winter to cloak the land.  Root vegetables such as turnips, beets and potatoes were amongst the last to be harvested before the ground became frozen.  And of course squash and pumpkin have now become synonymous with 'Halloween'.
Samhain is also the time where the veil between the worlds is believed to be at it's thinnest and least guarded.  When the Church placed their All Souls Day festival at the same time as Halloween a blending of the two mythos occured to create the symbolism that most of us are familiar with.
Here in Australia, Halloween and Samhain are separate events that occur at opposite ends of the year, just as with Christmas and Yule.  For Samhain I like to observe the more traditional and agricultural traditions, those that tie in with Autumn which is actually what is happening here, so I chose a project that reflects that.  When October rolls around I will make some of the spookier Halloween projects that we are all so familiar with.  So today, I am drying pomegranates.
My mum has an ornamental pomegranate tree, which is supposed to give small ornament sized pomegranates, but the handful she brought me were quite varied in size.  I've read two methods of drying online, one states to pierce the skin several times, whilst the other does not, then both go on to suggest leaving the fruit to dry on an airing rack for several weeks.  As I have a few pomegranates I am trying both methods!  I will report back and let you know which one I thought worked best.
What can you use them for when they are dry?  If you have any that are a bit blemished, so they can be gilded, either with gold spray paint or gold leaf, and hung as ornaments.  You can incorporate them into decorative seasonal bowls, pomegranates and pine cones make a beautiful combination, perhaps combined with some walnuts or acorns if they are available where you live, and some cinnamon sticks or cinnamon ornaments such as these.
Here's a beautiful combination that Pottery Barn put together, that you can very easily replicate: 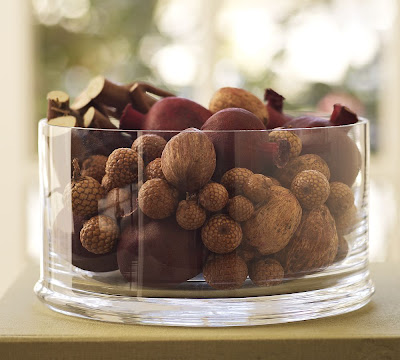 And here is another beautiful idea from the Vintage Garden Gal, an autumn wreath that uses the simple beauty of pomegranates and acorns. 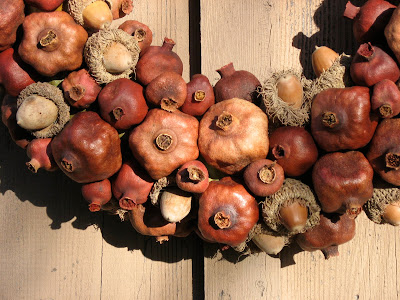